It’s been over half a decade since the isekai light novel anime boom, and it’s still showing no signs of letting up. Western anime fans are partly responsible for this; isekai anime are regularly among the top-viewed titles on Crunchyrolland Crunchyroll has been actively pushing for books like The Rising of the Shield Hero to get an anime adaptation by joining the production committee. According to Kadokawaisekai anime has even higher growth potential overseas compared to Japan.

In the publishing world, a HJ Bunko editor recently Noted that In Another World With My Smartphone sells even better overseas than it does in Japan (although those figures aren’t necessarily the reason why the anime announced a second season).

This phenomenon is not strictly limited to the portal fantasy subgenre. These days, the term “isekai” is often used in the English-speaking world as a catch-all for pulp fantasy light novels set in video game-like worlds, whether the protagonist is an outsider to the setting or not. Often, these stories originate as web novels following a very easily recognizable narrative template. (You can find a deeper exploration of that genre here.)

The appeal of such narratives is an interesting conversation in itself, but today I want to focus on another factor that doesn’t get talked about nearly as often: how the growth of English-translated light novels is tied to the rise of Amazon Kindle and self-published novels. According to Seven Seas Entertainment publicist Leanna Cruz, isekai light novels performing especially well as e-books, which was what was inspired by the publisher to release digital versions of its books several months ahead of the print releases.

While the Big 5 publishers have been reporting declines in e-book sales, Amazon accounted for 85% of e-book purchases in the United States in 2020, with indie books making up 38% of the top 100 bestsellers. Let’s take a closer look at how the isekai genre in particular has benefited from these publishing trends—and also how it opens up the market to new categories.

How the Amazon Algorithm Works in Favor of Isekai 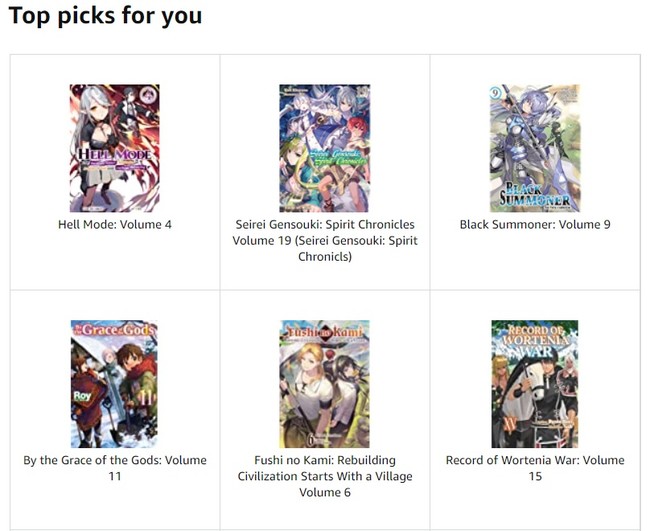 Amazon’s recommendation algorithm uses an extensive set of data, including cookies and purchasing history, to identify items that customers commonly buy together. It also identifies customers that make similar types of purchases, and recommends what they have bought to others in the same category who have not yet purchased it.

It’s easy to see how this system benefits formulaic books with similar-looking titles and cover art; the superficial similarities can kickstart a feedback loop which then compounds itself. It also helps that these series can run for dozens of volumes, and Amazon will recommend each and every one. Anyone who has purchased a light novel through the service has probably seen this in action: buy one title and suddenly your recommendations will be swamped with isekai.

The success of J-Novel Club‘s digital-first business model demonstrates this consumer behavior in action. A number of isekai “B-titles,” such as How a Realist Hero Rebuilt the Kingdom and Arifureta – From Commonplace to World’s Strongest, consistently performed well on Amazon even from the publisher’s early days. Today, some of the more popular digital-only offerings include Full Clearing Another World under a Goddess with Zero Believers and My Quiet Blacksmith Life in Another World. 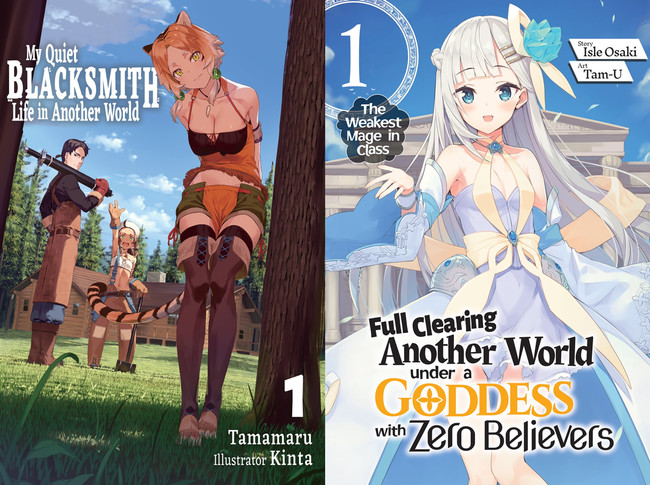 Another factor to consider is that the isekai subgenre as it currently exists comprises mainly of novels that originated on the web. Its readers are inherently more tolerant towards reading books on screens. Furthermore, unlike their Japanese counterparts, the translated versions don’t compete with the freely available web novel. (Fan translations, when they do exist, tend to be machine translated and of noticeably low quality.) Thus, they enjoy the benefits of online exposure without losing any perceived value, giving them the potential to outdo even the Japanese versions.

Genre-wise, isekai novels overlap with LitRPG and high fantasy, two categories which enjoy strong sales among self-published books on Amazon. One of the most successful examples of this genre in the English-speaking world is Mountaindale Press, which began in 2018 as a self-publishing e-book venture by LitRPG author Dakota Krout, and which now publishes books by dozens of authors across a similar genre.

According to Krout, one of the key ingredients to his success is his ability to publish lots of words quickly, highlighting what’s known among self-published authors as “the 30-day cliff”: “After 30 days, if you have shown that you ‘re prolific, if you’ve shown that you’re well received with reviews, and all this other stuff, usually you maintain high positions on the search charts.”

This overlaps with the appeal of isekai light novels: by drawing upon a wealth of web novel material, they can ensure consistent installments for years. English publishers push themselves to translate those words at a pace that can keep up. Seven Seas‘ release of Mushoku Tensei is a particularly notable example: not only is it released digitally first in order to circumvent the wait for printers, the work is split between two translators to cut the release window even further to just 2-3 months between volumes. Meanwhile, some of the biggest complaints core light novel fans have about Yen Press is that the schedules are longer and more erratic due to the publisher’s commitment to simultaneous print and digital releases. 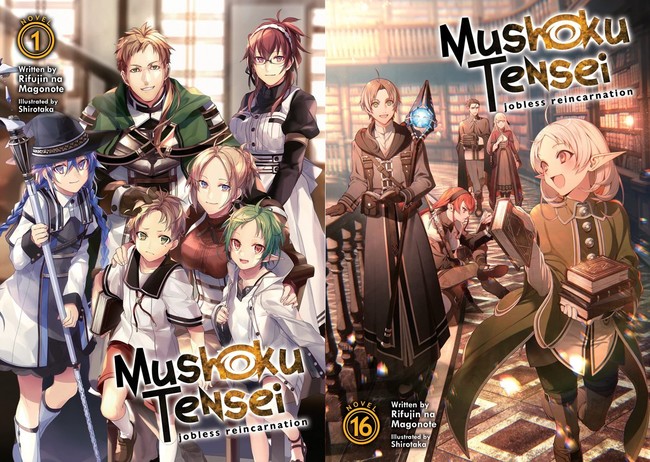 These days, the major light novel publishers are eager to license as many titles as they have the capacity to translate, because a rising tide lifts all books. The Amazon recommendation feedback loop can only be maintained by consistently pushing out books in the same subgenre. Even as publishers branch out into new genres, they need a steady stream of isekai releases in order to bolster sales across the board.

Of course, I can’t in good conscience talk about Amazon without mentioning how it sucks, from its exploitative work conditions and union busting to the existential threat it poses to independent booksellers.

For manga and light novel fans, there’s an extra layer on top of this shit sandwich: Amazon arbitrarily delisting books with no prior communication with the publishers. If you’re into books with sexy fanserviceor even just books that show illustrations of anime girls in any context (which is, um, most of them), then Amazon might suddenly decide to remove them one day for not conforming to its “global content guidelines.”

According to J-Novel Club president Sam Pinanskysales through Amazon have dropped 15% since the controversy in 2020, with most of that lost market share diverting to BookWalker Global, Kadokawa‘s e-book service which specifically caters to anime subculture. Kindle’s main benefit is improving the discoverability of titles among more casual readers that don’t necessarily keep up with the light novel community, but as the niche grows, so too does the number of savvy consumers.

Fun fact: BookWalker Global has had an ongoing “We Will Keep Selling Them” promotion ever since the kerfuffle

Even more significantly, e-books in general aren’t everything. As I mentioned earlier in this article, print book sales overall outweigh digital book sales 4-to-1 on an industry-wide level. Self-published literature might be a popular category on the Kindle market, but when it comes to traditional publishers, readers still gravitate towards physical books. Getting print versions of light novels onto bookshelves is particularly important these days because they’re typically stacked alongside manga—which is currently experiencing explosive growth in print sales in the United States.

The healthy diversity in the manga market has in turn expanded the possibilities for the light novel niche. Although the range of genres represented in Japanese light novels is narrower compared to the much larger manga industry, the current popularity of romance manga, including queer love stories, has made romance light novels an easier sell. Even just a few years ago, there was a dearth of high school romcom light novels available in English, with only standout titles like My Youth Romantic Comedy Is Wrong, As I Expected making their way across the Pacific. Nowadays, however, Classroom of the Elite is a bestseller, and publishers have been steadily adding more romcoms to their rosters.

We’re also seeing publishers branch out beyond Japanese pop literature, with Seven Seas recently delving into Chinese Danmei novels and Yen Press tackling Korean novels. Seven Seas‘s Leanna Cruz describes the sales as “astronomical,” despite the fact that there isn’t as much overlap between readers of Japanese BL manga/light novels and Danmei novels in North America as there could be. Author Mo Xiang Tong Xiu (MXTX) became a New York Times bestselling author, and the first print run of their series was a whopping half-million copies. 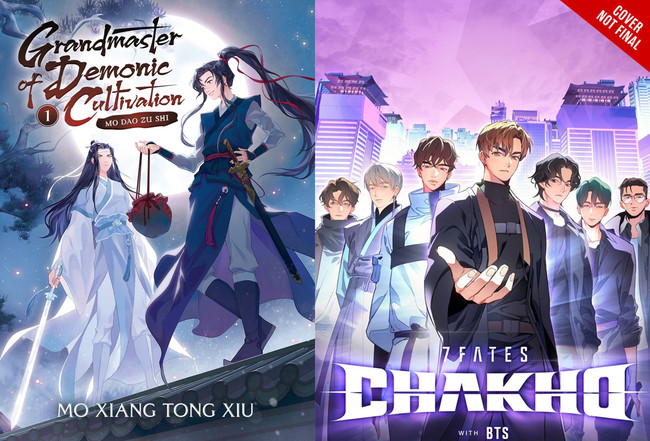 Looking back on these last few years, the growth of English light novels has honestly surpassed even my most optimistic hopes. Publishers had tried and failed before to capitalize on light novels back in the mid-late 2000s, only to be met with lackluster sales that couldn’t justify the higher translation costs compared to manga. I believe that the joint factors of the isekai anime boom and Amazon Kindle have made it possible for publishers to reenter the light novel market with more confidence in the mid-2010s. The publishing world is in a completely different place now than it was 15 years ago, and it’s allowed niche literature from around the globe to thrive.

Although I will continue to have mixed feelings about the isekai oversaturation and Amazon as a company, I’m optimistic about how it’s easier than ever now to find the books you want. The future of the light novels is up to you, dear reader. Let it continue to be bright and exciting.