Eldo Yoshimizu is as lively in person as he is on the page. His action comic, especially Ryuko, about the titular yakuza heiress and her fellow fighting females, have combat scenes that feel like deluges of black ink, document drawn as a fever dream. During the interview, he enthusiastically mimes what it’s like to be in a fight, to feel a fight, to twist your waist and use the weight of your foe against them. And Yoshimizu has tussled with yakuza for real.

He’s a Japanese artist who got his publishing break outside Japan, in France. More recently, the British publisher Titan Comics published four of Yoshimizu’s comics. The two-volume Ryuko is a decade-crossing saga of violence and vengeance. Hen Kai Pan (the title means “One and All”) is an eco-fantasy about the spirits of the Earth preparing to render final judgment on humanity. Gamma Draconis is an occult thriller in which an ass-kicking Japanese girl takes on sinister societies and the paranormal. Unlike his other stories, it’s a collaboration, with Yoshimizu adapting a story that was written by the French author Benoist Simmat.

In the course of the mentioned interview, Yoshimizu that while he hadn’t previously thought of a third volume of Ryukothat’s exactly what he’s working on now. Gamma Draconis will probably be continued as well, although Yoshimizu acknowledges that depends on Simmat. Hen Kai Panthough, is complete as it is, as a one-shot story.

Before publishing comics, you were an artist and sculptor, described as “creating vast, jewel-like shapes and sinuous, vivid outlines.” Why did you move into comics?

But making a film is extraordinarily tiring work and you need a budget to make it happen. Therefore (I thought), maybe manga could be my next move?

What film had the biggest emotional impact on you?

(Pause) Let me think… If you can give me the same question with manga, then I can give you an answer! Papillionan old Steve McQueen movie with Dustin Hoffman [made in 1973, about a prison escape]. That’s the thing, it really moved me.

Devilman, the first version, not the TV anime, when I was a little kid. Actually I went to Go Nagai‘s studio and got his autograph. 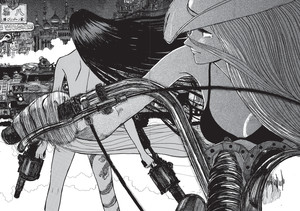 Was Ryuko your first comic?

I drew manga when I was little, but Ryuko is my first one as a professional artist. The important thing is that Ryuko is not really published in Japan. I just printed and self-published it through my website. I brought Ryuko to the Mandarake bookstore [a manga specialist shop chain in Japan] in person and asked them to sell it. Unfortunately for me, that’s still its only publication in Japan.

How was it published in France?

There’s a French publisher called Le Lézard Noir that was the first publisher. I was asked how many volumes Ryuko would be, and I replied that it would be only two volumes. I was still working on volume two when they published the first. [As mentioned above, Yoshimizu is now working on a third volume of Ryuko.] 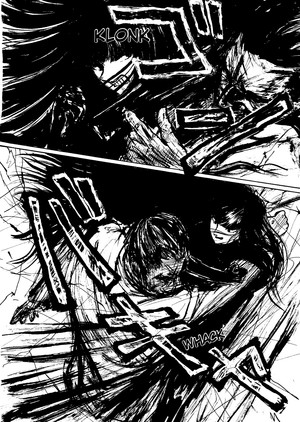 Looking in particular at the first volume of Ryukowhere the action scenes feel like explosions of black ink, and show very blurred motion, what experience did you want to give the reader?

I didn’t want to make an action scene that was too obvious, where someone is hitting and the other person is hitting back…. Twenty years ago, near Tokyo, a yakuza gangster [attacked] my young friend, and I saw a real street fight. I had learned a little bit of a martial art, Kung Fu Shaolin Kempo. This yakuza started hitting us with an umbrella… My eyesight while fighting became small and narrow, it was quite extraordinary.

When you get excited, you don’t really feel the pain. I felt some warmth around my forehead, it was blood, I still have a scar there… It was quite bizarre. The actual scene was quite chaotic while I was fighting against those mobsters. I didn’t quite figure out what was happening around me. It left me with a strong impression. I wanted to visualize that experience. That was a strong motivation [for me] when I was writing volume one of Ryukoespecially the action scenes. 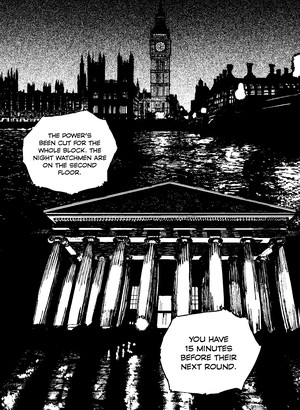 How did your collaboration with Benoist Simmat on Gamma Draconis (pictured left) come about?

The French publisher suggested I do it, it was a condition when they agreed to publish Ryuko. The research for Gamma Draconis was quite difficult for me. I traveled for the research, I went to London and France.

Did Simmat write the story first?

Yes, the story came first; I just suggested some slight changes, reducing some plot, and then I could visualize the story better.

Did this collaboration process restrict your creativity?

Not so much. The dialogue in this book is quite long, too much for me. The dialogue went on and on – I had to make space for the dialogue, so that was quite challenging. I actually took some clues from the camerawork in Heat.

All your comics have images of fighting females – why do they appeal to you?

(Chuckles) I like the strong woman, maybe that’s the reason. Especially when I started writing Ryuko, I wanted a lot to have female readers. I had that idea in my head. Especially in Japan, the woman is treated as vulnerable, kawaii – do you know Sailor Moon? They are strong but they are wearing short skirts, a bit childlike… For child readers, that’s fine, but I wanted to provide something more sophisticated, better for the adult readers. Asura [the protagonist in Hen Kai Pan] and Ryukothey make mistakes and they suffer a lot, and they’re going to grow up… That’s the kind of story I wanted.

Eldo also mentioned that he was influenced by the female yakuza character in the live-action Japanese film series Red Peony Gambler (Hibotan Bakuto), which started in 1968. This heroine is called Oryu, which inspired the name of Ryuko. She was played by Sumiko Fuji; decades later she would take anime roles including the samurai-descended matriarch Sakae in Mamoru Hosoda‘s Summer Warsand the mysterious aged sailor Dede in Children of the Sea.