The Unico: Awakening manga is a collaborative effort between the Eisner Award-winning artist team Gurihiru and acclaimed writer Samuel Sattin to reboot Osamu Tezuka‘s Unico for a new generation of readers. With the launch of Unico: Awakening‘s Kickstarter campaign, ANN had the opportunity to talk to writer Samuel Sattin about how this reimagining of Tezuka’s timeless story came to be.

Getting to do a brand-new manga based on a character created by Osamu Tezuka must be incredibly exciting! How did the idea for Unico: Awakening start?

It really is exciting!

The idea for Unico: Awakening came from a desire to engage with the work of Osamu Tezuka. I was lucky enough to be introduced to a colleague who founded Crunchyroll Japan. I met him through a manga-enthused friend of mine, and from there, I received the opportunity to pitch Tezuka Productions on a reboot idea for one of their characters. They had been looking to try and do something with Unico for a bit, and I took the opportunity to put an idea together. Namely, I wanted to try and create a new Unico that’s not just based around the cuteness of the character for merchandising, as often occurs, but the actual depth and intensity of Unico‘s story, and how it relates to Osamu Tezuka‘s work overall. Unico is a complex and sometimes frightening story about how love can be used as both a salve and a weapon. Like all Tezuka stories, I felt Unico is a story worth revisiting, and reinventing, for a new generation of readers.

Unico has been well-loved for generations all over the world. Were you a fan of Unico before this project?

Yes. It’s interesting: the Tezuka book that made the biggest impression on me is MW. I mean it when I say that it left a mark. Alternatively, I’d looked at Unico As a strange and fascinating story, but I didn’t know until after I took on this project that it was written at the exact same time as MW. In a way, it all lined up for me. It made sense. Unico is a character whose capacity for genuine kindness is betrayed by the goddess of love and beauty herself. There’s a fundamental problem there that readers have to think through to try and find an answer…and there’s no easy one. 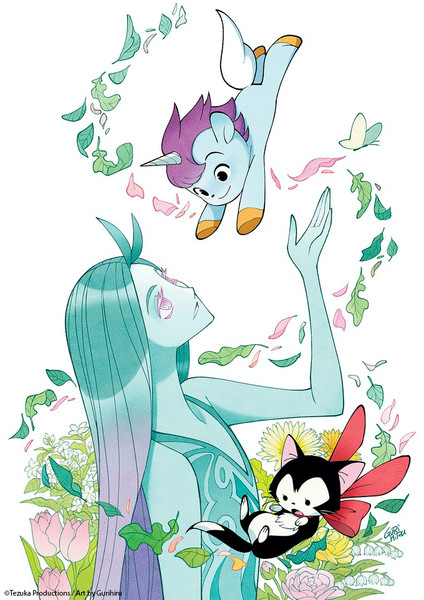 The new Kickstarter description for Unico: Awakening describes it as a reimagining. Does this mean it’s a reboot of the series?

Yes, that’s what all of us would like to see happen with this project. But Unico: Awakening can go in new directions, and there’s a larger story in the background that’s been established. So although we’re drawing from the original manga in the spirit of a reboot, we call it a reimagining instead. We’re retelling Unicodrawing from the spirit of the original, but creating something new.

Unico was originally a franchise aimed at children. Is this new series also kid-friendly, or is it more for those who grew up with the original?

I think that Unico: Awakening can appeal to readers across the age spectrum. Like many of Tezuka’s stories, it’s a fable. And a sophisticated fable at that. It’s for that reason that you can read Unico as a child and then reread it as an adult and get an entirely new perspective. Also, Unico was oriented towards children when it was created in the 70s, where kids entertainment could be a lot darker and more severe than it is now. How many traumatizing books, comics, and animated films can you recall from the 70s and early 80s? A few certainly come to mind for me. A question worth asking then is whether Unico would be considered “appropriate” for children of today’s world, and should it have been released as it was? 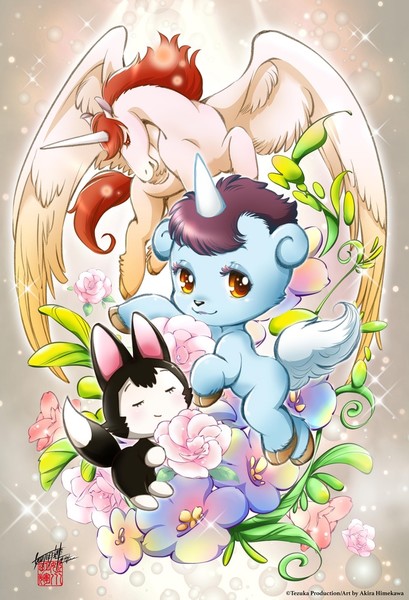 Tezuka being known as “The God of Manga” might make the idea of ​​taking on one of his iconic characters a bit intimidating. Was it difficult to balance your own voice as a writer while still staying true to the heart of Unico‘s character?

I think anyone working on a project created by Osamu Tezuka is going to be a little intimidated. I’m certainly no different. But I also find comfort in the fact that Tezuka himself was a big proponent of iterating on stories and having his own stories iterated upon. He had this wonderful view of comics, especially, considering the medium an international means for communication, a form of Esperanto. Tezuka Production carries on their namesake’s tradition of exploring and encouraging creative adaptations of the work. Working with Tezuka Productions, I have come to understand that the most important part of adapting a Tezuka work has little to do with granular details or sharing the same voice. What’s most important is developing a “core understanding” of what the story, and Tezuka himself, was trying to get across. I hope I can successfully honor Tezuka’s ideas with Unico: Awakening. I will try my hardest.

Speaking of Tezuka, how involved with the project has his estate been? Did they have any specifics they wanted to see in this new series, or did they give you a lot of freedom for your vision?

Tezuka Production has been very involved in the process, and will continue to be going forward. Though rather than providing a list of specifics they’d like to see, the process is more fluid. They truly have been both allowing and encouraging of our vision for Unico, and embrace the idea of ​​us taking it in a new direction for a new generation. This very much aligns with Osamu Tezuka‘s original vision for art, stories, and especially comics. He celebrated the idea of ​​iteration and inspiration. It’s incredible to be participating in that tradition he treasured. 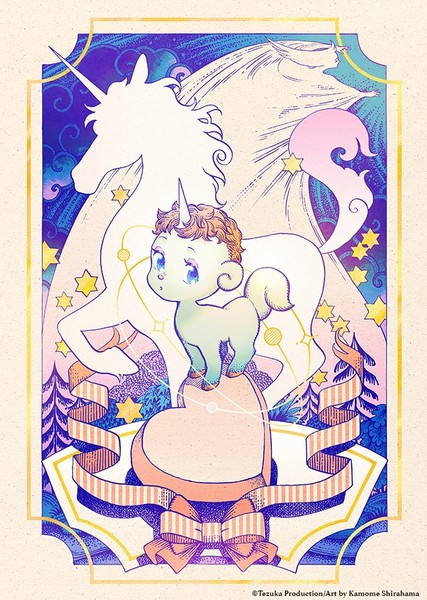 What were your biggest inspirations in writing this new series?

I love what some consider to be “weird” stories; namely, anything that breaks molds, especially Western molds. I think that’s one of the reasons I love to read stories from countries outside of the US, and manga in particular is filled with such ideas. For Unico: Awakening In particular, I pull from a lot of the manga I read, but I also pull from the source material itself, and the rest of Tezuka’s works. Like many, I’m also a huge fan of Naoki Urasawaand his and Takashi Nagasaki‘s Pluto is simply stunning. I love the way that they built upon Tezuka’s ideas, and made it something that stands completely on its own. Unico: Awakening could be said to be inspired by some animated films in the 70s and early 80s, like The Last Unicornfor instance, which, in my opinion, has more in common with Tezuka’s creation than not.

Both the original Unico manga and the films are pretty open-ended. WillUnico: Awakening have more of a concrete ending than the originals?

Oh, how to provide an answer without giving too much away… I will say that we have big plans for Unico: Awakening, and very much have a story we wish to tell. That story has a beginning, middle, and end, and we plan to be able to realize that vision, and will keep you all updated as we proceed. 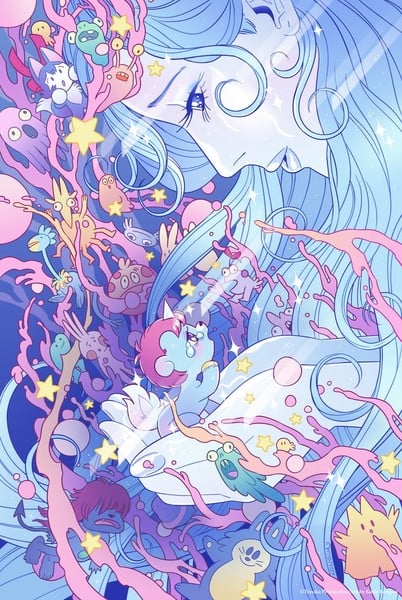 How did the artist team Gurihiru get involved with the project?

Gurihiru is an incredible artist team, and when I began speaking with their representative about Unico, we became convinced that they weren’t only the right artist team for the project, but that they were perfect for it. We began conversations, and it was important to me that they knew I didn’t want to just dictate a story for someone else to draw. Gurihiru and I would work on this project together, and share creative rights 50/50. In that way, we began this project in the spirit of collaboration, and because of that, arrived at something special.

How much did you and Gurihiru cooperation? Was it harder to work together on this project with the pandemic?

We collaborated over Zoom, and with the help of a very pedigreed comics professional living in Japan who represents Gurihiru on a variety of American books. There was a lot of translation and back and forth involved. And though I tried to get there a little earlier, I was eventually able to go to Japan to meet with them in person, along with the people we were working with at Tezuka Productions. But yes, our mutual comics friend in Japan was key in facilitating communication, and I was sure to make sure I adhered to all my deadlines, and all my commitments, in order to make sure that nothing fell apart. I think international projects like this are absolutely possible. You just need to be committed to communicating. 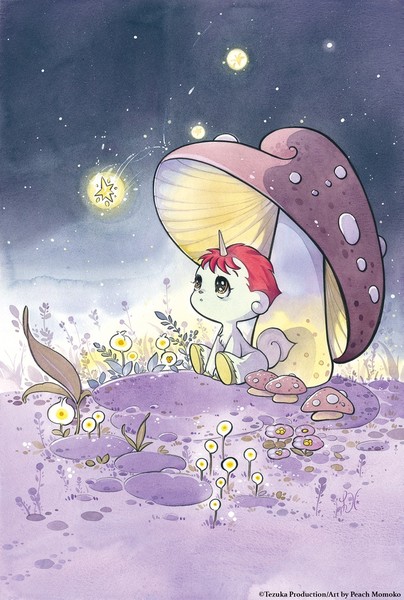 One of my favorite things about Unico is that one of its core themes has always been about the power of empathy and love. Will that still be true for Unico: Awakening?

Absolutely. The power of empathy and love are huge parts of what this project will focus on thematically…alongside what happens when love and beauty are misinterpreted for the purposes of vanity and want. I’ve gone about this at length already, I know, but one of things I love about Tezuka is that he wasn’t afraid of creating stories for children with complex and challenging themes. We hope to do those challenging themes justice with Unico: Awakening. And expand them to new horizons.

What’s one thing that you’d like to say to all the Unico fans around the world?

Thank you for reading, for looking, for believing in this project, and in Unico. We are doing this for readers because we think this story is important, and we all hope you will support us in bringing it into the world.