Legend of the Galactic Heroes isn’t exactly known for not being a wordy series. Still, it might come across as more self-aware than usual when, early on in this episode, Yang spends several minutes on end discussing the implications of the differences in the current political situations of the Alliance immediately and the Empire, only to turn to the camera (Frederica) and apologize for rambling too much. We’re three seasons into a story that’s had multiple adaptations for audiences to acclimate to its particular predilections, so I’d think anyone still watching knows what they’re here for. And that’s honestly a pretty funny punctuation to a well-placed informational analysis of the political ideas at this stage in LOGH: the concept of an ineffectual, corrupt iteration of Democracy versus a benevolent, liberal dictatorship.

Laying that comparison out at this stage makes sense, given that the plot this week features Yang walking right into an example of that former sort of nakedly corrupt, self-serving ‘democracy’. But apart from that broad thematic layout, Yang’s postulations here are more about clarifying the lopsided nature of the current conflict that would theoretically put him at odds with Alliance leadership on a more fundamental level. That is, Yang is content to let Reinhard lead the Empire on the basis of implied co-existence with the Alliance. As a government, the Alliance nominally just wants to be left to their own devices, while the Empire, previously at the behest of their Dynasty-driven fascist tyranny, are the ones insisting on muscling in on the ‘Rebels’ to try to reclaim control of them. With Reinhard focusing more on reforms of his own peoples’ social situations, Yang seems to be of the supposition that he could get brilliant blonde to more-or-less ignore the war with the Alliance, possibly even concentrating on the remainders of the Goldenbaum Dynasty As a socially-uniting enemy instead (something we know Reinhard and at least a few of his inner circle are also considering). The compounding issue then, as Yang implies, is that the Alliance leadership themselves might be considering allying with the Dynasty to general Reinhard, siding with fascism simply to protect their own power interests in the moment. That’s the irony of Yang’s considerations on the way to an inquiry into suspicions of his own disloyalty to the Alliance, that his previous actions in the military coup were in the best interests of those currently in power, but he doesn’t necessarily see their long -term leadership actions as worth- 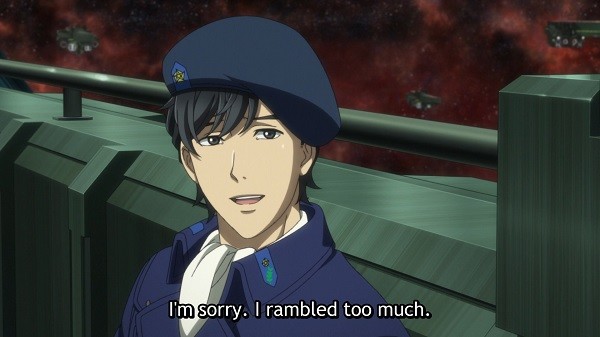 Seriously, if you’ve been missing LOGH as episodes of The Yang Show, this episode ought to sit you. It’s got his requisite exhaustive political pontifications alongside his famous levels of sass for those higher-ups who would attempt to intimidate him. That’s even the core premise of this episode, as the Alliance higher-ups summon him for an inquiry which Yang immediately takes psychological control of. Yes he’s clearly exhausted by the inanity of the proceedings, and as we see by the end of the episode, the exercise actually proves detrimental to the Alliance’s efforts in the overall conflict thanks to Yang being away from his post. But for the moment, there’s something appreciable to watch about how easy it is for him to answer the tribunal’s probing questions, on account of said answers being regarding his honest thought processes and considerations actions they believe were ‘questionable’ during his response to the military coup. He’s a guy who gets so many successive zingers in during the session that many of his ostensible accusers are laughing with him by the end of it. And the point he’s set up to earnestly articulate later, that a nation must exist at the behest of its people, not the other way around, even makes clear why that ‘rambling’ was necessary to lay things out at the beginning of the episode.

The structure of analyzing political systems at this stage in LOGH could particularly cast this whole effort as a criticism of citizen-led democracies and their bureaucratic failings, perhaps a little too much of a strawman in the face of Reinhard’s currently-successful Great Man dictatorship. But the narrative makes particularly clear (at this point, anyway) how much of this antagonizing of Yang’s successes is being done at the behest of the petty grievances and personal insecurities of one man, Negroponte, leading the inquiry. And even then we understand that this probe was inspired by antagonizations planted by Fezzan’s machinations, so as LOGH so often articulates, it’s less an indictment of incapable systems of governance, and more a highlighting of how easily weak individuals can hinder any system. We saw plenty of egotistical failures like this attempting to strongarm subordinates in the likes of the Empire’s civil war arc, for example, and the emergency at the end of this episode makes clear how quickly someone like Negroponte may regret his decision.

And for as characteristically chatty as the show continues to be here, it’s held up by the presentation being brought back up to the quality it was in Collision‘s earlier weeks. Centering things on a personality as strong as Yang is a smart, obvious move, of course, filtering even the more recap-heavy parts of the inquiry through his personal lens of realizing the effect he’s had on the ongoing history of the story. But we also get the return of some of those more filmic flourishes to the presentation, particularly any time we cut to Yang’s pathetic little holding cell of a temporary quarters, whether it’s bathed in the light of sunset to indicate the passage of time or having Yang’s door-closing interactions with his-not-quite captors punctuated each time with the audible ‘click’ of the lock being activated. My favorite touch is actually an earnestly modern new gag involving Yang’s communication signals being blocked while in the room, meaning him having to tender his resignation letter physically, on paperis a frustrated last resort in this iteration.

This was a rich, filling episode of LOGH, is what I’m trying to say. The political stuff felt specifically relevant to the plot points we’re touching on, rather than just being incidental ruminations to background details. And while Yang is clearly the focal point of all this energy, the other characters get their share of the spotlight as well. Good to see Frederica still earnestly refusing to take crap from those technically higher-rank who would try to obstruct her efforts to assist Yang (who to be clear, would absolutely not be able to take care of himself without her at this point) and also seemingly having picked up even more of her boss’s snark along the way. Everything here makes this one a fully fun episode to watch, even when it’s rambling a bit.

Legend of the Galactic Heroes: Die Neue These – Collision is currently streaming on Crunchyroll.

Chris is a freelance writer who appreciates anime, action figures, and additional ancillary artistry. He can be found staying up way too late posting screencaps on his Twitter.