DARLING in the FRANXX is a 2018 science fiction/mecha anime co-produced by Studio TRIGGER and A-1 Pictures. It is a Mecha and Science Fiction genre anime with rom-com mixed to it.

In a post-apocalyptic future, young pilots fight against giant monsters known as Klaxosaurs using giant feminine robots known as FRANXX. Their identities are defined by their role as pilots, with no personal freedom or knowledge of the outside world beyond the “birdcage” of Mistilteinn or the mobile fortress Plantation. When former prodigy Hiro becomes unable to pilot a FRANXX, he is filled with doubt and conflict about his worth. That doubt and conflict changes to resolve when he meets a strange part-klaxosaur girl with horns on her head called Zero Two. Despite the risks of teaming up with a known “partner killer”, Hiro becomes Zero Two’s DARLING to fly a FRANXX again. 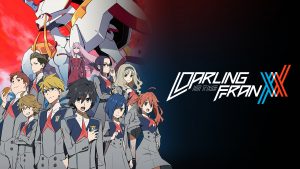 Darling In The Franxx has a bunch of vivid-characters, mainly the anime consists of characters that pilot Franxx. We have five main: Franxx Strelizia, Delphinium, Argentea, Genista, and Chlorophytum.

Pilots of the Franxx Strelizia

The Franxx piloted by Hiro and Zero Two. It is equipped with a giant spear called “Queen Pike” to battle with Klaxosaurs.

Once called a prodigy, but is now a dropout pilot cadet after he “lost his ability” to deal with the Franxx. He searches for his place among them. He is currently the only one who received no physical damage after riding the Strelizia, despite having some memory loss. Hiro used to be the leader among his friends and the one who gave them nicknames. Losing the ability to pilot left him feeling that his life had little worth, to the extent that he is more than willing to ride with Zero Two even if it means his death. However, this wish of his came to an end after he survived his third ride with Zero Two and hence proved the rumor about her, being a Partner Killer, wrong.

A very beautiful and mysterious girl with two red horns who carries the blood of klaxosaurs. An elite pilot belonging to the APE special forces unit with a “teammate killer” alias. She is the only known single-digit coded pilot. She is currently based in Plantation 13 under priority surveillance. Zero Two and Hiro are the newest members of Squad 13. The pair pilot the strongest FRANXX, the Strelizia, and the only known FRANXX capable of flight.

Pilots of the Franxx Delphinium

The Franxx piloted by Goro and Ichigo. As the Franxx for the squad leader, it is armed with two sword type weapons named “Envy Shop”.

Hiro and Ichigo’s best friend since childhood. He proposed Ichigo in the recent episodes but she didn’t give him a reply but said they would become great pilots together.

Hiro and Goro’s best friend since childhood, the squad leader of her class. She has a repressed crush on Hiro, maintaining a stoic disposition around everyone. Goro proposed her but she didn’t reply to him.

Pilots of the Franxx Argentea

The Franxx piloted by Zorome and Miku. As a Franxx that specializes in close combat and speed, it is loaded with a fist claw type weapon called “Night Claw”.

A loud, obnoxious, and lecherous Parasite. He admires the adults and the place where they live and aspires to become an adult someday. He appears to want to prove that he is better than the ‘double digits’ that seem to be considered as ‘elites’ when it comes to being Parasites.

A childish Parasite who often clashes with Zorome. She has a bright and innocent exterior but tends to be selfish to sway situations in her favor. Miku is not afraid to bluntly state her opinion about something, even if it might be hurtful.

Pilots of the Franxx Genista

A heavy weaponry Franxx originally piloted by Futoshi and Kokoro, until Futoshi and Mitsuru switch partners. It is covered with heavy armor and is loaded with
a fist bayonet-type artillery named “Rook Sparrow,” which can cause great damage at close distances.

A quiet but overpowering Parasite. Mitsuru originally admired Hiro and underwent a very risky procedure to become able to pilot a Franxx but becomes isolated when Hiro claims he forgot the promise they made, leading him to shun everybody around him until Kokoro gets close to him, and witnessing his suffering decides to become his partner.

A meek yet kind Parasite.A very gentle soul with a kind and optimism personality to match. She doesn’t speak too often, but when she does her words are well-thought-out and meaningful. Since her finding of a certain Book, It looks like she is interested in Pregnancy and Childbirth.

Pilots of the Franxx Chlorophytum

A support type Franxx for long-distance attacks, originally piloted by Mitsuru and Ikuno, until Futoshi and Mitsuru switch partners. Its arms are equipped with the heat sink called “Wing Span,” which allows the mecha to fly for a long time.

A plump Parasite who eats constantly and was infatuated with Kokoro. He ends up devastated when Kokoro decides to become Mitsuru’s partner instead. Though he’s optimism and does things at his own pace, he is also surprisingly sensible. He gets along with everyone and has a friendly personality.

A calm, insightful Parasite. It is implied that she has feelings for Ichigo, as evidenced by her attempting a pistil to pistil Franxx connection along with other subtle cues from earlier episodes. A very calm girl who prefers to keep to herself. An avid reader of books who can more often than not be seen with one in-hand. She is rather quiet and composed.

Other Major Characters Are

Naomi is a Parasite from the Thirteenth Plantation with the codename “703”. She is the former partner of Hiro, who held her back from becoming
a pilot due to his inability to pilot FRANXX.

APE combat headquarters’ parasite manager. She is in charge of parasites in Mistilteinn.

APE combat headquarters’ defense operation commander. He sent out combat strategy and command to parasites in the fight against klaxosaurs approached Plantation 13.

The scientist who developed Franxx. He is very concerned about the klaxosaurs.

Seven supreme commanders of the human dominion organ, APE, administrators of parasites, and the leadership of Franxx. They wear white clothes and masks , led by an individual called “Papa”.

The animation is pretty good. The locations such as Garden, Cerasus, Chrysanthemum are very well shown. The character “Zero Two” is drawn pretty well matching her personality traits. It is co-produced by A-1 pictures who are well known for their good animation.

The music in the anime is good. Their ending song “Torikago” is a well-known song. The background music suits the Mecha fighting scenes perfectly. The agony scenes background music is good too. Overall the music department is doing a pretty good job.

The animation style is wonderful, the setting original and the characters entertaining. At first, I thought this was going to be a weird anime for weird people but it’s enjoyable and interesting, I realize that I couldn’t have been more wrong. The story is lacking creativity at least until now. The character development quite good, as anime focus on each character and their behaviour. They need to focus more on character development. But we can feel overall enjoyment over watching the anime.