The best way to approach Chrono Cross is to forget that it’s a sequel to Chrono Trigger. It isof course, but Chrono Trigger—an inventive, marvelously crafted time-travel romp that’s tied with Earthbound As the most beloved RPG in history—is a hard act to follow. Saddled with that sort of legacy, Chrono Cross earned a divisive reception after its release over two decades ago. Square Enix‘s new Chrono Cross: The Radical Dreamers Edition remasters the game and bundles it with its direct inspiration, the previously Japan-only 1996 graphic adventure Radical Dreamers. Beneath these new additions, however, the ups and downs of Chrono Cross refuse to change.

Chrono Cross is nothing if not ambitious. Contrasting the time-travel storyline of Chrono Trigger, it presents a tale of alternate dimensions. Our hero is Serge, a seemingly normal kid in a gentle seaside village. As he ponders the future with his equal almost-girlfriend Leena on a beach one day, a sudden vortex warps Serge to a different dimension. It’s much like his own at a glance, but his fellow villagers take different paths in life, and this new world’s version of Leena informs him that the Serge she knew actually drowned when he was a boy. Upon visiting his own grave, Serge meets up with Kid, a spitfire thief with a hybrid British-Australian accent and a grudge against a mysterious figure named Lynx. And so the two of them start a quest that involves traveling between dimensions and trying to resist the pull of fate itself.

There’s equal ambition in the cast of Chrono Cross. Rather than building a core cast of under ten characters, players can recruit a total of 45 party members over the initial quest and through replays in New Game+ mode. You’ll find conventional RPG characters like the conflicted knight Glenn, the cocksure mage Guile, and Riddel, the gloomy daughter of a military leader, but Chrono Cross doesn’t stop there. Also available are a living straw doll, a talking dog, a sentient turnip, a flower creature, a blacksmith, a scientist, a cyborg, a bartender, a struggling artist, a foppish swordsman, a glam rocker, a dancer, a baby dragon , a fairy, a cavegirl, an alien, a mermaid, an elderly gnomish mage, a rowdy seafaring kid and his family, and a skeleton clown who must be gathered and assembled one piece at a time.

All of these characters find their way into the creative battle system of Chrono Cross. Attacks are handled in three tiers, each showing a percentage to gauge the likelihood of a hit landing, and using each move drains a turn gauge while building up a character’s ability to use their spells, items, and unique abilities. All of these are assigned to slots, and you’re limited in how often your party can employ them in battle. It allows for a lot of customization, and Chrono Cross Adds a color-coded element system to both enemies and the playfield. Each fight becomes a balancing act of attacking judiciously, conserving items, and using spells just when the elements favor them. 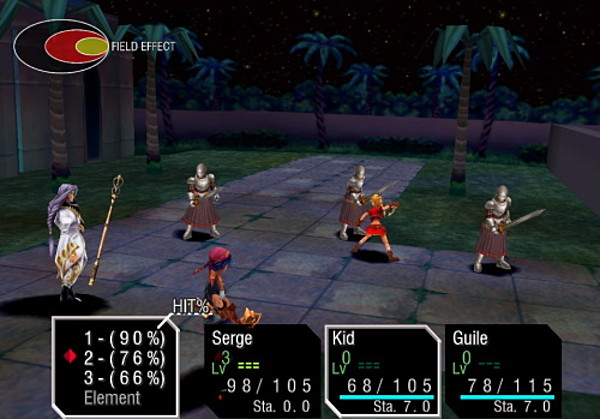 Chrono Cross also makes combat less intrusive than other RPGs of its era. Enemies are visible on the main screen instead of emerging at random, and a lot of them can be avoided. A similar innovation lets you skip areas on the world map if you’ve cleared them already, making a smoother experience overall. Still, it’s not without some drawbacks. The few exclusive moves that characters possess are disappointing when compared with Chrono Trigger’s signature abilities and team-up attacks—which Chrono Cross offers only in a few rare and obscure cases. Having to pick attacks from a menu is also less satisfying than, say, the cruder but invigorating button-mashing of Xenogears (made by much of the same team), and all those percentages clash with the wonderfully organic atmosphere of the game.

And that atmosphere goes a long way in smoothing over the flaws in Chrono Cross. Squaresoft‘s programmers knew the PlayStation in and out by the end of the 1990s, and Chrono Cross is their most visually impressive work. Everything in the game feels remarkably alive, from the tropical fronds and ocean vistas of Serge’s home to the depths of an eerily preserved high-tech base. The use of color and light is remarkable, and the designers’ choice of lush islands and colorful cities is still a charming alternative to the more medieval fantasy settings preferred by other games.

It all glides along thanks to a marvelous soundtrack. Composer Yasunori Mitsuda wrung an astonishing variety of sounds from the PlayStation’s processors, and his tracks are rarely at a loss for catchy hooks or haunting melodies. The first few hours of the game set a perfect stage of melancholy tones and bright atmosphere, casting players adrift in a strange world while ruminating on how lives can change irrevocably with just one decision.

The music helps Chrono Cross pull off scenes of striking beauty: a sudden trip to a world rendered in children’s scrawls and simple tones, a sunset confrontation with a face from Serge’s past, and even the first time you take to the sea with a rousing theme perfectly evoking a new sense of exploration. 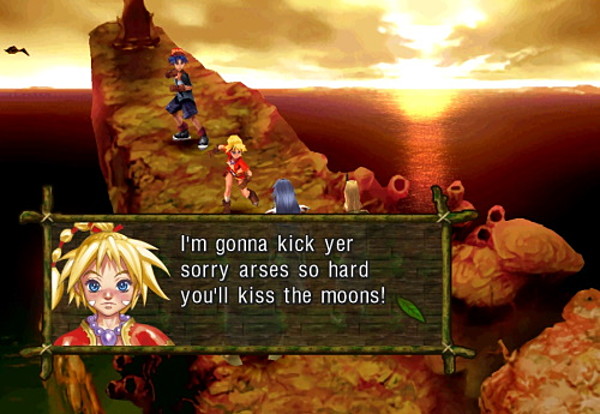 Yet for all of its spectacular environments, entrancing music, varied paths, and multiple endings, Chrono Cross can’t pull it all together. The character lineup is wide and varied, but the majority of them have brief and unsatisfying plot arcs or no plot arcs at all. Serge himself is mostly a blank slate, and Kid, likeable little punk that she is, can only perk things up so much. And for every cool new party member, you’ll encounter two who are merely annoying and disposable.

This is exacerbated by the localizers’ decision to give party members cartoonish speech patterns, and it’s not just Kid’s charming Cockney Aussie-isms or Zappa’s Scottish tones. You’ll get characters ending words with “-om,” squeaking in Widdle Baby talk, and babbling like Jar Jar Binks or Bizarro Superman. It was amusing when Mog said “Thankupo!” in Final Fantasy VI and…well, mostly tolerable when Chu-Chu used “chu” instead of “you” throughout Xenogearsbut there’s a point where cute becomes insufferable, and Chrono Cross treads too far past it.

There’s no denying that Chrono Cross has some brilliant, affecting moments (one of which actually involves time travel), but they’re scattered and diluted by the game’s lack of focus. It’s too caught up in giving the player options in which party members to recruit and which plot variations to pursue (and which characters to inadvertently miss). The central story wrapped around Kid’s crazed revenge and Serge’s struggle to simply exist, both potentially fascinating ideas, doesn’t get the development it needs. The game’s biggest secrets are revealed in a flurry of exposition literally right before the final boss, and the ending’s attempts at pathos seem hollow despite an amazing closing song. Even separated from its sequel status, Chrono Cross just doesn’t satisfy in its storyline.

And how does it fare as a sequel? Discarding Chrono Trigger’s uplifting and whimsical tone, Chrono Cross ranges from contemplative to downright grim, alluding to the original game’s characters in ways either bluntly tragic or lazily mean-spirited. It’s a daring turn for a sequel, yes, but it also reminds us that Chrono Trigger’s small cast was more memorable than Chrono Cross‘ overstuffed lineup of gimmicks and stereotypes and rejected Pokémon designs. 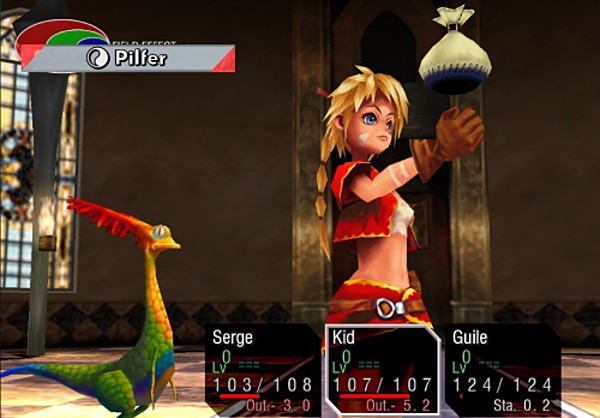 The remastered edition of Chrono Cross decent looks at first, with sharp new character portraits and immediately available options to slow down or speed everything up (both of which were buried secrets in the original game). Yet technical issues are rampant: the frame rate drops at random and makes the game feel choppy, and some background graphics and character models actually look worse than the PlayStation original. The new font is also unattractive, though at least it’s legible, unlike some recent Final Fantasy reviews. Perhaps some patches will amend the glitches, but at this writing it must be said that this version of Chrono Cross isn’t the definitive release it should have been.

The most interesting new addition for this release is the first official English translation of Radical Dreamers, a 1996 text adventure game originally made for the Satellaview service in Japan. A brief and opaque follow-up to Chrono Trigger, it finds Kid, a laid-back bard version of Serge, and a masked sorcerer named Magil infiltrating Lynx’s palace in search of the Frozen Flame. It’s the same storyline that Chrono Cross would expand upon, but here it’s much tighter in focus and more satisfying in its development. Serge has slightly more personality here, and more chances to interact with his companions. 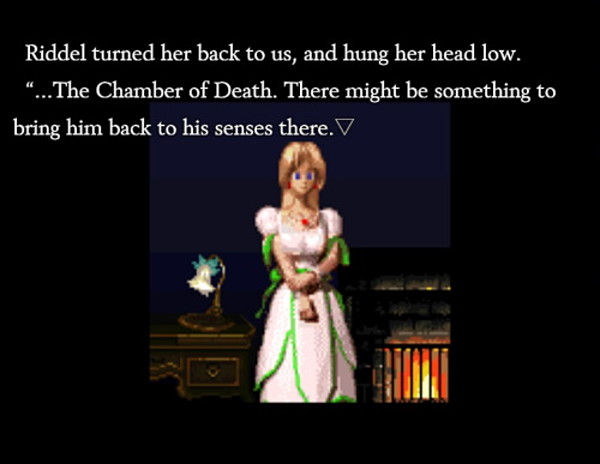 As an adventure game Radical Dreamers is fairly simple, befitting its origins as a download-only novelty. Lynx’s mansion has only two dozen or so rooms, battles are simple, and there’s a lot of backtracking. Yet it’s a fascinating bonus for Chrono Trigger fans, and it’s impressive that Square finally saw fit to localize it. In fact, Radical Dreamers doesn’t do Chrono Cross any favors in the plot department. Compared to the text adventure’s straightforward approach and firm character connections, Chrono Cross seems all the more a missed opportunity.

Despite some problems in the remastering, Chrono Cross remains much the same as it was 22 years ago: spectacular to see and hear, intriguing to explore, and generally disappointing below the surface. Radical Dreamers is a nice addition, however, and it presents an interesting narrative just as Chrono Cross delivers almost everything except that. And Chrono Cross still stands out, whether players sift the clever ideas from the undernourished ones or just appreciate it as one of the most beautiful games ever made.